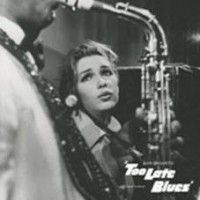 Too Late Blues *1962( is certainly one of the greatest films ever made about the jazz world< It was a perfect match between subject matter and filmmaker. In 1959, Cassavetes had starred in a TV series called Johnny Staccato, playing a jazzman who moonlights as a detective. The film's brilliant music score is courtesy of David Raksin and performed by such jazz legends as Benny Carter, Red Mitchell and Shelly Manne. Raksin's theme tune, mimed by Ghost's group during the opening credits, immediately establishes the film's cool, sardonic tone, and neatly mimics the attitude with which the actors deliver their lines. The easy way out would have been to do standards, but Raksin wrote all original music for the film, even for the source cues. And what music it is - Raksin at his best, and Raksin at his best is as good as it gets.