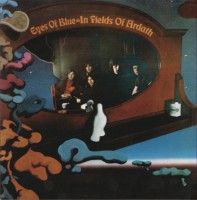 UK psychedelia moved into prog rock with spices of hard rock in the late sixties, some even coined a new label to describe the strong textures resulting of the mixture of rockier blues sounds, jazz, revolutionized freakbeat and the hardest side of popsike - heavy psych. Amongst the best works of the era were the two splendid LPs recorded by Welsh band Eyes Of Blue. The Eyes Of Blue where formed in 1966 and soon won the Melody Maker Beat Contest, a fact that secured them a recording deal with Deram records. The label issued their first 45s, they were good but -due to company pressure- more Blue Eyed Soul or even bubblegum oriented. By the time they released their first LP, on Mercury, their real sound had surfaced, showing influences by some of the coolest bands from the US West Coast like The Doors or Love, and also counted on the help of Graham Bond. Originally released in 1969, In Fields Of Ardath was the follow up to their superb debut LP, expanding the path of heavy Hammond based psychedelic progressive rock at its best with their aim of experimentation. This album contains also material they recorded for the movie Toy Grabbers in collaboration with Quincy Jones. Members of Eyes Of Blue would later join Man, Pete Brown & Piblokto! and Gentle Giant. First ever legit vinyl reissue, in a limited run of only 500 copies, including two bonus tracks from a non-LP 45, in remastered sound and featuring an insert with photos and liner notes. Dont miss the chance of adding this one to your record collection!

Eyes Of Blue
Crossroads Of Time

Ardley, Neil
A Symphony Of Amaranths