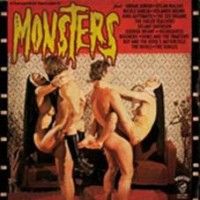 ... Friends of the Monsters Paying their tribute to 30 Years Swimming against the Mainstream, in 1986 they were just Friends Drinking Buddies and Music Fans and they Formed the Monsters in Bern Switzerland after their first show and 1st KASSETTE it was Clear that band will make it around the Globe, in the 30 YEARS they played almost Every Continent, Playing JAPAN-s the Shelter or Headlining New York-s famous CBGB-S, playing countless Clubs and Festivals.For that Compilation they asked their Friends to play a song they wrote.. for example BIGENERIC *Marco Repetto( he is a Long time Hero of all the members he who wrote EISBÄR for GRAUZONE and played in BERN-S FIRST PUNK BAND *1977( GLUEAMS or Eigernordwand, then we have Helios^Hess that is a side project of Herpes ö Delux, Berns Industrial Pioneers *REVEREND BEAT/MAN AND THE CHURCH OF HERPES( or their Long Time Friends Roy and the Devil-s Motorcycle, who saw the monsters when they were Teenagers and got inspired my them *their Song was way to long.. so it made it on the CD not on the Vinyl( King Automatic is the Monsters Hero the World-s best One Man Band they played countess Gigs Together!!! Delaney Davidson and lovely Miss Nicole Garcia from New Zealand and Los Angeles doing DARK COUNTRY and even Darker CUMBIA, and are Family. Sudden Infant, Urban Junior and the Failed Teachers are from Aarau *50% of the Monsters are from Aarau( and are Long Time Friends from the beginning on, the Same with the Seniles from Zürich who-s singer *alain( was working for REC REC DISTRIBUTION the swiss main disrtibuter of voodoo rhythm records in switzerland back in the Days, Dylan Walshe from Ireland did a very special 1st time NASHVILE RECORDING while touring in the USA !!! for that Album the Sex Organs are Old BEST FRIENDS and the Devils are our New Love !! ... Special Track is Denis and the Traktors, who is Denis the Son of MEPHISTO PRODUCTION Philip Niederberger from Luzern who set up alof of Shows for the Monsters. TRACKLISTING> 01. URBAN JUNIOR / DEAD END STREET 02. DYLAN WALSHE / AND THEN YOU CRY 03. NICOLE GARCIA / BABY OK 04. ROLANDO BRUNO / NENE MI DROGA SOS 05. KING AUTOMATIC / PONY TAIL AND A BLACK CADILLAC 06. THE SEX ORGANS / BLACK 07. THE FAILED TEACHERS / I SEE DEAD PEOPLE 08. DELANEY DAVIDSON / KISS HER DEAD 09. SUDDEN INFANT / MORE YOU TALK 10. HELIOS ^ HESS / MOTHER-S NEST *I WANT YOU( 11. BIGENERIC / LET ME SPEND THE NIGHT WITH YOUR WIFE 12. THE DEVILS / MORE YOU TALK 13. THE SENILES / GOIN AWAY GIRL 14. ROY AND THE DEVIL-S MOTORCYCLE / PONY TAIL AND A BLACK CADILLAC 15. DENIS AND THE TRAKTORS / I WANNA BE ONE OF THE MONSTERS

Various
Gamelan Of The Walking Warriors