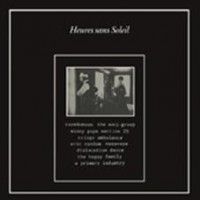 "The compilation album Heures Sans Soleil was originally released in October 1985 in an edition of 1000 copies. It was the fourth vinyl release on LTM, the label I founded while still at school in Edinburgh, and followed on from singles by Minny Pops and A Primary Industry, as well a live album by Crispy Ambulance *...( I can't claim the idea of an artsy cosmopolitan compilation album was terribly original. I was 19 years old at the time, and still deep in the thrall of earlier Crépuscule collections such as From Brussels With Love and The Fruit of the Original Sin."Extended liner notes by James NiceReleased in collaboration with LTM / James Nice.