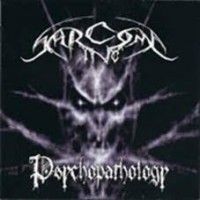 The mixing pot of influences Sarcoma Inc. receives sustenance from is both eclectic and multifarious. I hate to use abstruse hybrid genre tags, but if anything can be called blackened thrash metal, Psychopathology is most definitely it. There is a gritty, underproduced appeal to many of Jensen-s riffs that while originally serving as one/half of Limbonic Art-s aural assault, are given the chance to fully eradicate eardrums and expectations this time around. In fact, there are many times when this and Phantasmagoria could almost be sonic twins in terms of sepulchral aesthetics and riff bombardment. It isn-t that the approach here is far removed from albums like The Dark Prophecy, but the slicker production values help bring out a whole new side of the riffs that was sorely lacking or obfuscated by low/fidelity fuzz on Sarcoma Inc.-s earlier albums.