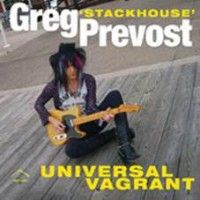 After a career lasting close to four decades, it was only two years ago when Prevost decided to launch his first solo record: the celebrated "Mississippi Murderer", an album where Delta blues and hi-energy R&R were combined in a masterful mix heavily influenced by the likes of the Stones, the Yardbirds and NY Dolls. This recording has become a cult classic, but the ever adventurous Prevost is now back with a brand new artifact: "Universal Vagrant". This second album goes one step further than Prevost's previous waxing and can be safely described as the best recording in his long and illustrious career. It also confirms what those in the know already knew: the fact that Prevost is a top-notch songwriter, one of the coolest R&R singers ever, and that he has a deep understanding of the roots of his music...be them the original blues greats ("Moanin' The Blues", "Mean Red Spider"); the personal idols inscribed in his DNA, Keith Richards and Johnny Thunders ("Gin Soaked Time Warp", "Shot of Rock and Roll", or the superb, gospel-oriented "Lord Shine a Light on Me"), as well as the dark, dangerous Stooges-infused sounds ("Evil On My Mind" or his killer version of "Codine"). Here you have the results: a perfect production, an explosive sound, a recording cooked with ease and among friends, but with edge, attitude and sheer class. This is a first rate R&R album where all pieces fit neatly. No mean feat. TRACKLIST 1. Moanin' The Blues2. Gin-Soaked Time Warp3. Signed D.C.4. Evil On My Mind5. Mean Red Spider6. Shot Of Rock & Roll7. Lord Shine a Light On Me8. Shitkicker Blues9. Hayseed Riot10. Codine

Mallrats
Fall In Love All Over Again With...