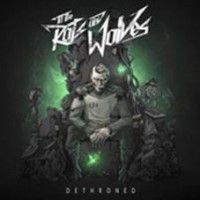 To The Rats And Wolves
Dethroned

From Break Out Magazine> ,Here we go! It took the sextet from Essen, Germany, a mere four years to make their mark. With last year's debut ,Neverland" TO THE RATS AND WOLVES have earned their place in the German trancecore scene - and they are plaaning to keep it that way with their sophomore offering ,Dethroned". From the looks *and sound( of it, they will clearly succeed. The band has developed their overall concept to set new aesthetic and musical standard/ The big sing/along parts that fans love so much have become even bigge, the heaviness is twice as heavy and the trance parts are even smarter than before. Sold out venues, more and more followers and click every day are proving TO THE RATS AND WOLVES right. To cut things short> everyone into trancecore from ENTER SHIKARI to ESKIMO CALLBOY and peers, every one into modern/style guitar music has found his or her master here."

Nadsokor
Out From Pandemonium (+cd)