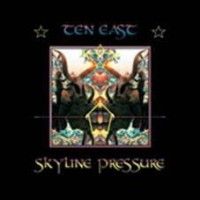 Look, sometimes these things just happen. Desert legends and Dutch heavy rockers sometimes get together on stage and it turns out better than anyone could-ve possibly imagined. So it was that guitarist&desert rock progenitor Gary Arce and drummer Bill Stinson of Yawning Man wound up playing with bassist Erik Harbers and guitarist Pieter Holkenborg at the Ma;ana Ma;ana Fest *which Erik and Pieter also organize( in the Netherlands in 2014. You can see videos of it on YouTube. Although the impromptu foursome had never played together before, the chemistry was there. The fluidity was there. As they jammed in and around Yawning Man songs, it was clear the union had a breadth that was only beginning to be explored. Two years later, Arce, Stinson, Harbers and Holkenborg have come together again, this time as a new incarnation of Arce-s Ten East project. They proudly present their album, Skyline Pressure, through Small Stone as the next stage of their collaboration. Ten East was last heard from in with 2008-s The Robot-s Guide to Freedom, which was their second offering behind 2006-s Extraterrestrial Highway. Between the two records, Arce-s co/conspirators have included the likes of Bryan Giles *Red Fang(, Scott Reeder *Kyuss, Fireball Ministry(, Mario Lalli *Yawning Man, Fatso Jetson(, Greg Ginn *Black Flag( and Brant Bjork *Kyuss, Fu Manchu(. Harbers and Holkenborg earn their place in this illustrious company across the entire span of Skyline Pressure, from the sandy reaches of @Planet Blues@ to the peaceful roll of the title/track, to the subdued sprawl of the 14/minute @Sonars and Myths.@ The album was recorded by Harper Hug at Thunder Underground and also features guitarist Nico Morcillo of French experimentalists Hifiklub on select tracks *@Planet Blues,@ @Tangled Forest,@ @Stalactite Dip@(, but for anyone familiar with Arce-s pioneering work in Yawning Man, his mark on Skyline Pressure is unmistakable. The stuff of tonal archetype. And while it started out as one of those things that just happened, the album has captured that spirit of improvisation and natural chemistry that emanated from the stage at Ma;ana Ma;ana Fest, and brought it to a lasting document that-s all the more special for the spontaneity that lies at its heart.

Hate Forest
The Most Ancient Ones