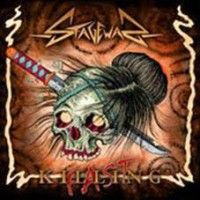 Stagewar proudly presents KILLING FAST, featuring fresh and alive Thrash/Metal on the highest level. Regarding their roots and influences, Rocktimes.de nails it> @The bashing crew from Neu/Anpach Germany presents . descently played Thrash/Metal, which has it-s roots deep in the eighties or the Bay/Area.@ ,Thrash Metal influenced by the likes of Annihilator, Megadeth ^ Co, which is presented in a transparent sound, while being authentically brought into the right atmosphere, pleasing with creative guitar work. / Rock Hard Magazine STAGEWAR was founded in 2003 by vocalist and guitar player Dominik Dezius and guitar player Kimon Roggenbuck. After experimenting with different musicians on style and sound, the band records their debut album in 2010, entitled LIVING ON THRASH. In 2011 Josef Schweng becomes drummer of the band and Alex Binias bass player. After numerous gigs and two european tours the band finally releases their second album KILLING FAST