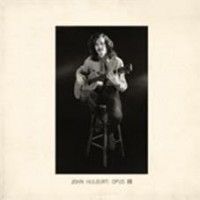 Stickered with "1972 private press LP Produced For Reissue By Ryley Walker". The reissue of Opus III includes illuminating liner notes from sister, Cynthia Fritz< The Knaves- Gene Lubin< and Ryley Walker, as well as vintage photographs. Guitarist and singer/songwriter Ryley Walker discovered the 1972 private press LP in a Chicago record store, loved what he heard, and teamed with Tompkins Square to produce the reissue. John Hulburt *1947/2012( was a member of legendary mid/60-s Chi/cago garage rock band The Knaves, whose records were recently reissued by Sundazed. Opus III showcases his exceptional talent on the acoustic guitar. Walker writes in his liner notes, @Solo acoustic guitar music was adopted by several in the Berkeley school and the ever expansive roots fanatics in the South, but here in the middle of the country with harsh winters and the land/locked prison of corn fields, it was almost destiny that the amplifier assault of electric blues and controlled chaos of dance music came from the South Side.@