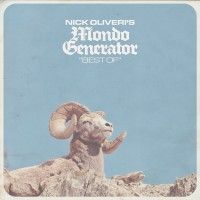 Next year will mark two decades of existence for the instrument of sonic chaos known as Mondo Generator. The project, formed by then/soon/to/be/Queens of the Stone Age bassist&vocalist Nick Oliveri *see also Dwarves, Bl'ast, Kyuss, etc.(, released their first album, Cocaine Rodeo, in 2000 via a nascent Southern Lord Recordings and never looked back through a whirlwind of intense punk, speed metal and heavy rock. Across four studio full/lengths and more tours than one could count, Mondo Generator has never been anything less than completely in your face, so that even Oliveri acoustic work arrives dripping with attitude.On Sept. 23, Mondo Generator will compile tracks from their albums and numerous EPs into an aptly/titled Best Of 2LP to be released on Heavy Psych Sounds. Topped with artwork by Branca Studio and presented on limited blue and black vinyl, CD and digital, the collection will span the career of the band, with guest appearances throughout from Josh Homme, Dave Catching, Dave Grohl, Alain Johannes, John Garcia, Brant Bjork, Alfredo Hernandez, Mark Lanegan, Chris Goss and many more.As of last fall, Mondo Generator are working as the trio of Oliveri, guitarist Mike Pygmie and drummer Jeff Bowman. They were said at the time to be putting together a fifth album, but no word yet on when that might surface. A European tour sometime in the fall to coincide with the Best Of release is anticipated."I'm stoked that somebody wants to put out the best of record and the songs on the album are the best songs over the years, 1997 to the present," says Oliveri. "I feel that those records slipped through the cracks and now this is a chance for people to get a better presentation of the band. Only the best songs off the records!"