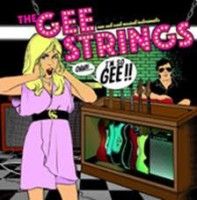 Any band starting with a JOHNNY THUNDERS guitar intro can only fit on here, right_. Well, apart from this, The GEE STRINGS have been rockin' all over Europe since 1994 with different line/ups, establishing themselves as one of the leading '77 punk bands in Germany. On this album, you'll find the atomic rhythm section of French surf punk band The Irradiates, and the album was recorded in France *Cube Studio, Besan/on(, but mixed in Vancouver, Canada by Adam Payne.The band's snotty punk rock'n'roll only seems to get better and better as time passes by. Catchy tunes like "Too Many Crazies" and "I Will Get You", or dancey rock'n'roll as in "The Punk", or "Jerry's Going Ape" won't have any difficulties to make you sing and move your feet! On this new album, the band chose to cover Slaughter ^ the Dogs classic "Situations", a song that perfectly fits with The GEE STRINGS spirit. The band always had good taste in covers since they also recorded their own "Cherry Bomb" version on their second album.You'll even get a bit of melancholy in "Can't Call It Love" and "Punk Rock Heart", which is kinda what "Poison Heart" was to the RAMONES. Bernadette's guitars and Ingenius Pop's vocals actually works very well too in slower songs. Founding members Ingi and Bernadette are two of the best in the business / the latter a red hot guitarist in the Steve Jones&Johnny Thunders&Cheetah Chrome mold and the former sounding like the love child of Joan Jett and Iggy Pop. While very much sticking to the band-s roots in Pistols&Thunders&Ramones worship The vinyl version of "I'm So Gee!!" looks fantastic, so that's just another reason for you to grab it!