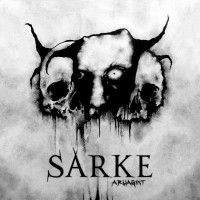 Third album by the Norwegian all/star band Sarke, coming back with a new blast of raw blackened thrash metal in the vein of Celtic Frost&Hellhammer, as it was taught on the previous two releases.Formed in 2008, the band counts among its members with a large cast of members from the Norwegian Black Metal scene, such as Sarke *bass(, Cyrus *guitars(, Anders Hunstad *keyboards(, Asgerr Mickelson *drums( or Nocturno Culto on vocals. 300 copies. gatefold.