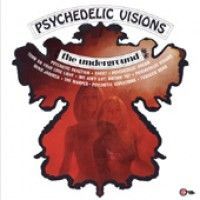 Rare, sought after exploitation album from 1967 showcasing the garage-turns-to-psychedelia sound of the era. Fuzz and acid, no need for flowers - but bring them along if you feel like it! Opening with an outtasite fuzz drenched cover of the Count V timeless punk anthem Psychotic Reaction, this LP takes us on a fuzzier than fuzz trip through some of the classics of the era like The Blues Magoos' (We Ain't Got) Nothin' Yet, The Isley Brothers' Shout, John D. Loudemilk's Tobacco Road and Bobby Bland's Turn Of Your Love Light, plus -hey!- five original tracks in the same style signed by Merk Currie - the LP was originally released on Mercury, "Merk Currie" was nost probably the name invented by the company to scam of writting credits from the members of this mystery band, probably paid just for the sessions. The playing though all the sessions is outstanding, putting this mysterious album up there with the best of the genre, an LP wich stands halfway the covers concept of Psychotic Reaction by The Fire Escape and the delivery of interesting original material of Psychedelic Moods by The Deep. Comes in original artwork, in a limited edition of 500 copies only.

Various
She'll Hurt You In The End

Various
Back From The Grave Vol.2