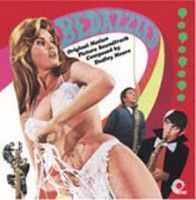 Legendary soundtrack to legendary film, amazing music, this unique package includes the Pete And Dud radio spots CD.One of the greatest soundtracks of all time. Originally written by Peter Cook and Dudley Moore for this cult British movie, first pressings have always been very hard to find. A sublime musical mixture of pop, jazz, psyche and stupidity, this rare score sadly became the victim of terrible bootlegs in the late 1990s, when classic 1960s scores became very much in demand to the easy & jet set & soundtrack in/crowd. This is the first ever legal repress, and comes with alternate versions of the classic "Love Me" and "Bedazzled" cues, as well as the first ever repress of Pete And Dud Cordially Invite You To Hell, an LP of Pete And Dud improvising about the film, that was given out at the premier.