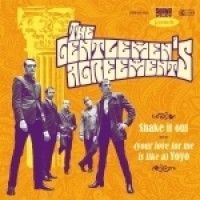 One more time your favourite French gentlemen bring you an absolutely raving new piece of vinyl! THE GENTLEMEN-S AGREEMENTS have long established a sheer unbeatable reputation as mindblowing live/act while they-ve already delivered their smashing debut single "All Good Things" which has been playing and filling dancefloors at 60s/ and Mod/events all over the world, as well as their incredible debut album "Understanding!". Now their brandnew single "Shake It Out" follows the tradition of these hit records.The A/side "Shake It Out" is a catchy, infectious tune as it moves a little bit towards a psychedelic hammond Freakbeat/direction. The chime of bells/element reminds one of PIERRE HENRY-s "Psyché Rock", which was famously used as Futurama/title/song. The B/side is an ultimate 60s hammondbeat/piece. "*Your Love For Me Is Like A( Yoyo" has a fantastically groovy hammondorgan, a fabulous beat and a little bit of a funky side to it. Once again, an absolutely danceable smashing hit by these fine gentlemen! Both of the songs are self/composed and won-t leave your head that easily.Brilliant new single by the fabulous GENTLEMEN-S AGREEMENTS! Something you definitely wouldn-t want to miss out on!