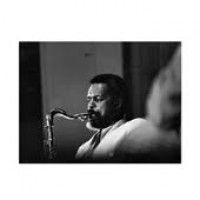 Recorded in Stockholm on October 25, 1962, this session is one of Ayler's earliest recordings, featuring a European backing group he assembled during his brief stay there, before returning to the States in 1963 and beginning his legendary run with ESP-Disk and Impulse! Though his genius is not yet fully formed, one can easily hear he's headed that direction, and this rare and long out of print recording is an essential piece of the history of one America's most uniquely lyrical voices on the saxophone.