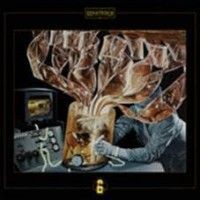 DEKATRON is a duo formed in 2013 by IVAN SENTIONAUT, who has just released his first solo LP on Sincronica, and MIGUEL A RUIZ, a pioneer of Spanish underground electronic music since the early 80s who has worked under countless aliases through his cassette label Toracic Tapes, such as his legendary project Orfeón Gagarin, praised by Asmus Tietchens and Discos Esplendor Geométrico. The duo's first album, "Dekatron II" (2014), received excellent reviews which regarded the duo as the new sensation in cosmic electronic music. Dekatron take as inspiration the beginning of computing, the first IT systems and the deep cosmos. They explore the possibilities of the sounds of the new electronic age, using a wide array of digital and analogue synthesizers, sound generators and rhythm machines."Dekatron III" is the awaited continuation: a second LP (also a limited edition) where their style range within electronic music widens, including more topics and where we find echoes of Japanese tecno pop, cosmic disco and extraterrestrial ambient music. It's a richer album, more varied and mature than their debut, and without a doubt a future classic of Spanish electronic music. As with the previous record, the wonderful sleeve has been designed by Alonso Urbanos, from an original oil painting by Adamo Dimitriadis. Science and retro-futurism in harmony.TRACKLISTSide 11. ABANDONO CUANTICO2. RABIA SIDERAL3. PLANITIA DESCENSUS4. AURORA ARTIFICIALSide 21. CODIGO CLAUSOR2. VORTICE CRANEAL3. GALLOPEDRO4. TREN PERIMETRAL