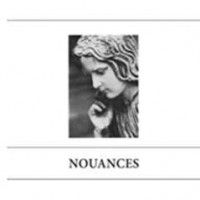 Nouances was born as a territorial meeting point. A sort of platform whose intent wasn't to show everything but to approach common elements in the contemporary underground culture. A personal route made possible by the usual tools of its heyday: fanzine and music. So, the project was developed as a bilingual booklet with an audiotape attached. Literary contributions came from the editors of the most sought after zine and multimedia teams of the time: Dancing Silhouettes, FREE, Nero, Trax, Tribal Cabaret. The tape was addressing, true to the line, different souls covering a large musical spectrum from romantic new wave funk to minimal synth, even going through post industrial scenarios. All tracks were otherwise unreleased. Tasted today ouances' has a heterogeneous feel, but - at the end of the day - that was the goal: approaching the diverse. - FIRST REISSUE EVER- LIMITED EDITION OF 300 COPIESMusic by Daniele Ciullini, Rinf, Minox, Twilight RitualText by Paolo Cesaretti, Paola Triboli, Filippo Rizzi, Vittore Baroni, Marco Formazioni, Daniela Giombini, Romano Pasquini, Daniele CiulliniPhotographs by Daniele CiulliniTrack list:Red side: 1. THE TEMPEST - Abc 2. MINOX - Purgatoryo