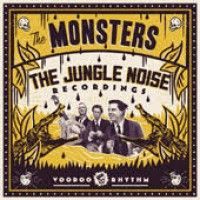 Recorded in 1994 With Robert Butler (Pantichrist) and Kat Allen (Reithalle Bern) this was the first Monsters Album With ELECTRIC BASS a stead of Stand Up Bass, and with a Wall of TRASHED OUT FUZZ Guitars, and it was a big turning point for the Band after releasing the more or less Pschobilly GARAGE oriented 'THE HUNCH (1991)' + 'MASKS (1989)' Yves (the Lead Guitarist) Left the band and they shrank into a TRIO and Beat-Man added a FUZZ BOX and LEVEL 13 to the guitar, the whole band was fed up of the Clean Studio Sound and decided to do everything at Home and rented a Recording machine (AKAI-1214) and recorded it in only 2 Days !!Jungle Noise was original Released by Germany s Underground Label 'JUNGLE NOISE' in 1995 as a 10" Vinyl and some more tracks where released as 7" on other Labels, the Song 'it's not my way' was actually recorded for a Swiss Anti War Compilation, (STOP F/A-18) but it was not taken (to trash) after the release of that Album the Monsters went serious Touring Europe and made them self a household name in the European Underground Scene