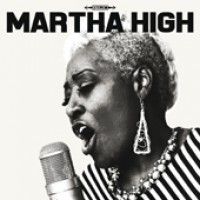 James Brown. Who doesn-t know about the godfather of soul_ Who doesn-t know about the milestone anthem "Cold Sweat"_ Maybe there is nobody, but we are sure that many of you don-t know that hidden on that particular song, and in all of James Brown-s productions, is one of the best kept secrets in soul music> Mrs. Martha High. She is the one who sings that crazy soprano note at the very beginning of the song and she is the one who sang behind James Brown for about 35 years. She was with Brown and the JB-s in Boston on the infamous night after the Martin Luther King assassination, she flew with him in the dangerous Vietnam skies to entertain the US soldiers, and was also in Zaire celebrating the "Rumble in the Jungle" between Ali and Foreman. Martha was truly a friend, confidant and supporter of the godfather of soul. Maybe she was just too young and shy to jump over the other soul divas to ask for a solo record. Today is different. Mrs. Martha High is the hardest working woman in show business. She is still touring worldwide as a lead singer of Maceo Parker-s band but now she is on fire because finally, she has recorded the album she never made but always wanted to make. 11 killer original tunes produced and arranged by Luca Sapio, the Italian soul ambassador, in true analog super sound. The tunes evoke the best productions of the golden era of Southern soul as well as the sonic landscapes of the Italian soundtracks of the 60-s. Here is the middle ground where these two unheralded musical traditions meet and Martha is the undisputed Queen. Don-t miss the chance to take a listen. This record is made of truth, soul, love, and pain / a full spectrum of emotions that only a Queen can deliver to your ears. She spent much time in the studio with Luca and his guys to make it happen. This is not a revival, this is not retro, this is NOW. She took it as a challenge and we are sure that she won.

Antibalas
Where The Gods Are In Peace

Cooke, Sam & The Soul Stirrers
That's Heaven To Me