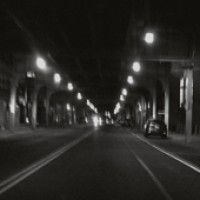 Philadelphia native and arch noise provocateur M Ax Noi Mach, aka Robert Francisco. Recorded once again with the help of Arthur Rizk (Prurient, Power Trip, Cold World, etc) at Salomons Gate in 2014, this new record chronicles some of M Ax Noi Mach's heaviest, most intense recordings to date; their minimal, bare immediacy comes from primal desires brought to a boiling point. Musical touchstones on this 8-track album move from Nurse With Wound through Prurient and SPK. It's an unholy, clamorous din spewed up from the bowels of hell. The crunchy distortion of alking at Night', album highlight econd Glance' and ndulgence', deal in anguished, hateful vocals - with words spat out like flames of fury. Then there's the relentlessly abrasive drone of urrounded', the muted, glossolalia-like mutterings of merican Child' and the warped synth poetics of hite Heat'; all in all, a visceral, brutal record that absolutely refuses to let up. The shadowy Robert Francisco has been a vital artist in the US underground since the late 1990s.