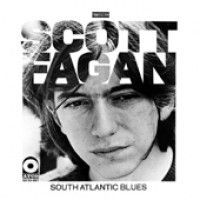 Scott Fagans debut album, South Atlantic Blues, is a genuine lost classic - a mystical, mythical and deeply soulful masterpiece.Recorded when Scott was just 21, virtually homeless and with pennies to his name, it was released in 1968 on Atco Records but remained obscure, con-founded by a series of frustrating near-misses. From being mentored by Doc Pomus to being discovered by Jasper Johns, Scotts incredible story and mu-sic unfolds on South Atlantic Blues, remastered and reissued for the first time ever on CD and vinyl. . Steeped in delicate psych, soul and resonant acoustic guitars "that stroke and stone you to the core" (Shindig). Its an epic song cycle about Fagans hard-scrabble life in the Virgin Islands, where he was raised and lived until 19 before returning to his birthplace of New York City. A teenage prodigy, mentored and managed by songwriters Doc Pomus and Mort Shuman, Scott recorded early material for Columbia and Bert Berns BANG label before signing with Atco. In 1969, artist Jasper Johns discovered South Atlantic Blues in a cut-out bin, fell in love with the record, and used it as the inspiration for three artworks, known as Scott Fagan Record. The pieces are now housed in the permanent collections of MOMA, the Met and the Walker Art Center. Born on 52nd Street, Scott was the son of a sax player and singer who fraternized with jazz greats. That familial connection with music would come full circle when Fagan discovered he was the biological father of songwriter Stephin Merritt of the Magnetic Fields. They did not meet until the premiere of a documentary about Doc Pomus in 2013. A conversation between the two is included in the liner notes of this CD release. The initial pressing of the vinyl comes as a limited edition, hand-numbered, 180g vinyl with a reproduction of Jasper Johns 1970 lithograph, Scott Fagan Record, as cover art, and includes a digital down-load. The CD comes with extensive liner notes, rare photos, and a download of five bonus tracks-the original 1965 demo for Doc Pomus as well as a recently-discovered acetate, the only copy in existence of a previously-unknown Doc Pomus song, All For The Sake Of Love, that only Scott Fagan recorded.