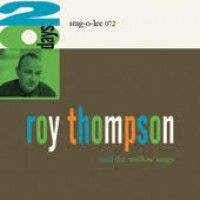 Roy Thompson & The Mellow Kings is a Rockin' Rhythm & Blues band from France. The six musicians are all experiencedveterans from the Rockin' Scene and well versed in roots, blues and rock'n'roll .After several years in Canada, where in 2003 Roy Thompson set up a band called Roy Thompson & His Royal Acadians andsome tours in Canada, USA and Europe Roy (known as Olivier Laporte to his mom) decided to go back to Europe in 2005 andfounded The Mellow Kings in 2010. Their influences range from Blues to Rhythm & Blues, from Swing to Rockin' 50's/early60's sounds. Songs by artists such as Ike Turner, Ray Charles, T-Bone Walker, Larry Williams, Little Richard, Young Jessie,Junior Watson, Bobby Blue Bland and the Memphis sound, Freddie King, Johnny Otis, Guitar Junior and the Louisiana Styleare in the Mellow Kings' live repertoire as well as many self-penned tunes.In 2012 they released their first album Back On Tracks which was released by Sleazy Records out of Spain. Promoting thatalbum they played all the big festivals such as the Rockin' Race in Spain, Rhythm Riot in England, Live & Jive Festival inSweden, Cahors Blues Festival in France, Rock n Roll Festival in Disneyland Paris, Tremblay Blues in Paris, AmericanFestival in Tours, the Rockin' Horse Festival in Limoges, Blues en Loire in France, the Moondogs Festival and the SummerJamboree in Italy, Let's Get Wild Festival in Germany and The Firebirds Festival in Leipzig and gigs in Switzerland, Italy,Belgium, Holland, Germany, England, Sweden and Spain... a huge tour in Europe backing up Gizzelle, the California SoulDiva from Los Angeles, in November 2013, July 2014 and August 2015 + Turnhout Festival in Belgium, Vintage Roots Festivalin Milano, Festi Jump Blues in France, and Get Rhythm Go Wild in Germany. You get the idea...In the meantime new recordings were made which are being released on the German based Stag-O-Lee label in January2016. The title of the album is 20 Days and it features tunes by Mike Pedicin, Little Richard, Bobby Bland, Aaron Neville, Otis Blackwell as well as a number of band compositions. In general the sound of the new album could be filed under New Breed -a kinda new genre that defines the music made between the late 50s and early 60s when Rhythm & Blues slowly morphed into Soul.It is a rockin' record with lots of sizzlin' guitars, great piano work and a powerful sax! The band's masterpiece so far. Go check itout!