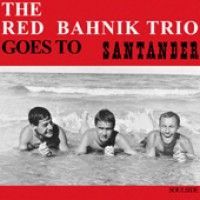 First reissue of a great piano trio album, originally released in 1963 on the private "Soulside" label from Zurich/ Switzerland with only a handful of copies known to exist. First and last recordings of unknown jazz pianist Red Bahnik, with John Treichler on bass and a young Mani Neumeier on drums, including unique versions of Les Mc Cann "Vacushna" and "Fish This Week", Horace Silver "Sister Sadie", plus original material like the oriental-tinged "Fata Morgana Altamira" or the Latin tune "Santander". Carefully remastered in 2015 for vinyl LP, comes with original cover artwork and liner notes. Essential European modern jazz LP - last original copy sold on ebay for over 1000 $.The Red Bahnik Trio came into existence in February 1962. The three musicians however already knew each other before: Red and Mani have played together since 1960 in various combos and met John in a jam session during the 1961 Jazz Festival in Zurich. They found very much resemblance in their ideas and their feeling for the music and thus decided to form a Trio.