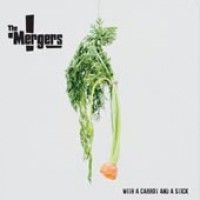 Germany's hottest beat-sensation THE MERGERS are back with their second album "With A Carrot And A Stick" and live up to the earlier success of their smashing debut album "Monkey See, Monkey Do!". Their sound is of unaltered quality with ingenious musical arrangements, catchy authentic beatpop-sounds and beautiful harmonies that give you goosebumps.The album consists of thirteen self-composed tracks, starting off with the absolute hit "Shop Window Dummy", followed by the powerful, danceable "Little Barney". You'll be mesmerized by the harmonies in "Pie In The Sky" and the "Achilles Heel" as well as the dreamy ballads "Please Don't Let Me Know" and "Oh Lord". "Hunt The Hamster" stands out as the only instrumental on the record, that fits in perfectly with its cool, surfy elements. "You Set Your Life" reminds one of THE BEATLES' White Album with cool guitars and elaborate songwriting. No wonder, the boys from Nuremberg have already conquered the big stages at international scene-festivals! Their stage power is infectious and their songs invite to sing and dance along to.THE MERGERS have once again produced an album, that is without a doubt among the top recent albums. Singer Jerry Coma's stunning, clear voice, catchy guitars, a stomping beat, fantastic, versatile songwriting, and hit melodies all contribute to a very round album that leaves nothing to be desired.

Lyres
A Promise Is A Promise

Legendary Stardust Cowboy
Oh What A Strange Trip It's Been On A Geminis.