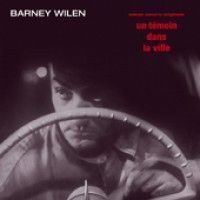 Having already played on a film soundtrack with Miles Davis on Luis Malle's "Ascenseur pour l'échafaud", Barney Wilen -- still barely in his 20s - got the opportunity to compose the score for another French film that used jazz as a background, "Un Témoin Dans La Ville". Judging by the present album the result is most convincing; one couldn't hope for a better marriage, so perfect is the way the music suits the image and vice versa. The soundtrack is coupled on the B side with the more freely jazzy studio album "Jazz Sur Seine", which teams Wilen with three-fourths of the original Modern Jazz Quartet (with Milt Jackson on piano only, of all things, Percy Heath on bass, and Clarke), plus the Latin percussion of Gana M'Bow. Wilen gets more of a chance to stretch out and reveal his swinging, warm tenor tone; Jackson is quite competent as a comping accompanist and in fairly fluent, right-handed bop flurries.