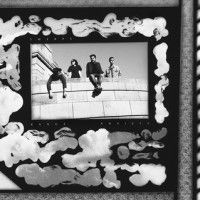 Formed in Melbourne in late 2008, Twerps enjoyed immediate success, releasing a series of vinyl singles and cassettes on various labels around the world. The release of their 2011 self-titled debut album led to appearances at SXSW and CMJ and tours with Real Estate, Mac DeMarco, and others. Not wanting to wait until 2015 to unleash new songs on present and future fans, Twerps quickly recorded the delightful Underlay EP, which Pitchfork described as "songs fraught with universal, emotionally familiar sentiments." And now, Merge brings you Twerps' second full-length album, Range Anxiety. The band has always worked and thrived on a precarious balance of moods and cooperation. Alex Macfarlane joined the band in early 2013, and the new lineup has seen the band refine their mode of operating in an intuitive way. As singer-guitarist Julia McFarlane says, "We tried to be open-minded to new processes." Range Anxiety is a worthy showcase of the creativity and vitality Twerps bring to their music. At first listen, nods to The Go-Betweens and the band's beloved Flying Nun influences are clear, but upon closer examination, Twerps expand into a sound uniquely their own.