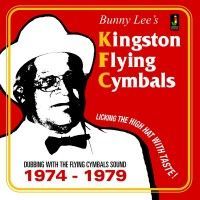 Bunny Lees Flying Cymbals or flyers rhythms dominated the Dancehalls and the charts during 1974 and 1975.The style based around the Philadelphia disco or the Philly Bump ,the sound of an open and closed hi-hat was not necessarily novel but Strikers innovations of bringing a number of different elements into play most certainly was.Johnny Clarkes interpretation of Earl Zeros None Shall Escape the Judgement not only opens this se but also opened the floodgates for the flyers style.The story had begun the previous year with LowellSlyDunbar."Sly played the flying cymbals first"....I said to Sly" You played it on the Delroy Wilson tune for Channel One named Its a Shame AND Sly played it before that was with Skin, Flesh & Bones on Here I am Baby Come and Take Me the Al Green tune, when Al Brown sung it for Dickie Wong with the tsk,tsk,tsk sound on the hi-hat,I named it flyers but they didnt know what flyers was!!!"..Bunny Striker LeeBefore too long "Every tune we put out we put the rhythm behind it" and every Kingston producer followed suit with their own variation of Strikers Flying Cymbals Rhythms...........