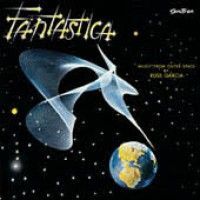 A 1950s exotica classic that stylistically defines the genre "Space Age Pop". The era of manned space travel bengan in 1959, but in musical terms, composers had been exploring interplanetary vistas for centuries. Garcia's accomplishment was to merge compositional sophistication and the thecnology of the modern transistorized recording studio with cleverly created special effects. From the first track, "Into Space", Garcia sets the controls of interstellar overdrive and never looks back. His pan-galactic portraits shuttle the listener from planet to planet, as moods shift from mysterious to exhilarating. In Garcia's own words "...it was one of the first science-fiction record albums. We had no computers to make effects, so I recorded a musical saw struck with a soft mallet; blew a straw into gelatin water; vibrated a kitchen off the edge of a table; tapped woods blocks; hit a long while moving a microphone from the center to the edge. I recorded these sounds at different speeds, some of them backwards through feedback echo. Then I wrote them into the orchestral score."

Bun Hunga And His Combo
Relax