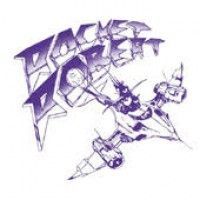 Those whove dirtied their fingers searching high and low for analog synth nuggets can rejoice at the arrival of under-the-radar synthesizer maverick "Rocket" Robert Moore. Less a reissue than an exhumation-what with a scant, hand-screened 142 copies produced in 1982 that circulated little outside the confines of Oregon state-Rocket Robert drifts in the backward-looking sounds of early synth innovators, while equally mining the kraut-tinged moments of punk-era instro synth explorers and the first breaths of synth-pop, rather than carrying similarities to the "New Wave" that was then talking hold of the masses. Issued by Moores own Salem, Oregon-based Future Records in 1982, his eponymous debut is simultaneously light-hearted and shot-though with ominous oscillations and offers up a darkly-throbbing, other-worldly vibe that is sure to ensnare synth-heads, beat-diggers and those searching the margins of the private-press alike. Got Kinda Lost Records is over the moon to allow this singular, unique album another chance to shine. RIYL: Delia Derbyshire, Fad Gadget, Mort Garson, Gershon Kingsley, Martin Rev, Morton Subotnick, etc."Unclassifiable outsider synth-damage not unlike Bite-era Bruce Haack and Damon Edge of Chrome collaborating, or weirdo proto-new wavers like Ghostwriters, Pulsar, Todd Tamanend Clark, or a non-operatic Klaus Nomi. Better yet, imagine a Grandmaster Flash-obsessed Kluster retreating into a stoney basement with Richard Pinhas-if that makes no sense, you're on the right path." - Steven "Plastic Crimewave" Krakow (Galactic Zoo Dossier)