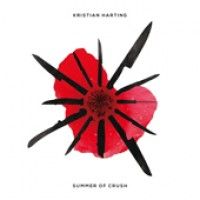 180g Black Vinyl - 3mm spined sleeve, 4c print on 300g GC1 board, reverse board (inside/out) print - Limited to 500 units - Download card included (sticker) After his critically acclaimed debut solo effort "Float", released 2014, seminal Danish troubadour Kristian Harting returns with a new album and blesses the world with a batch of 12 new songs. While its predecessor "Float" incorporated ethereal songwriting skills deeply inspired by Western lo-fi pop, Mali Blues and the more avant-garde side of Folk, Kristian widens his focus towards a much more pop-orientated approach. "Summer Of Crush" is an album oscillating between melancholic dreamscapes and synth-ladden shamanic dance tracks. What remains, is the technique - mainly his guitar, voice, circuit-bending, effects-pushing and diverse electronic and acoustic trips. The tracks were written, played and recorded all by himself. Armed with loop pedals, effects, a synth played with his feet and a deep understanding of how analogue electronics can be used to create a true emotional feel he went into his own studio, working for several weeks to shape imaginary forms into sound collages of captivating intensity. With yarning a cocoon of sounds and melodies around the listener he creates an atmosphere of comfort and ease, but breaking up the narration here and there like an emotional tightrope dancer who lets himself fall into the mesh, showing the audience that there might be certain demons lying in ambush striving to destroy emotional comfort. In 2014 he toured Europe massively with FUTURE ISLANDS, and later with labelmates CONNY OCHS and FRIEDEMANN, building up a quite impressive fanbase. In August 2015 he returned to the fold and played two sold-out shows with FUTURE ISLANDS following their invitation to the massive Vega venue in his hometown Copenhagen.