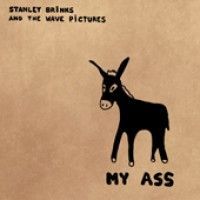 My Ass is an album born out of Brinks life on the road, life as an outsider. It is a celebration of new drinking companions, in new bars, in new towns, every night. .Wakefield, the first single has a jazzy flowing bass driving a day in the life of Brinks on tour: a sense of togetherness, a touch of sax and the knowledge that love will act as a shield against all evil. Berlin is yet another anthemic Brinks sing-along. Its airy ambivalence celebrates both the freedom and the ensuing pressures of his beloved adoptive hometown. Stanley Brinks was born in Paris 1973. He studied a bit of biology and worked as a nurse for a while. Half Swedish, half Moroccan, strongly inclined to travel the world, he soon began spending most of his life on the road and developed a strong relationship with New York. By the late 90s hed become a full time singer/songwriter - Andr Herman D - as part of three piece indie-rock band,