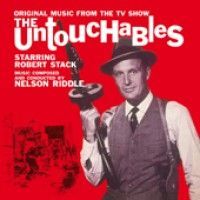 "Nelson Riddle's score does a great deal to create the undercurrent of excitement that characterizes our show. It is music with a heartbeat that captures perfectly the suspense and impending violence of the action." Robert Stack - Original liner notes Robert Stack, winner of an Emmy Award for his fine portrayal of Eliot Ness the Chicago gangbuster and prohibition agent in "The Untouchables" the legendary American crime TV drama that ran from 1959 to 1963 on the ABC Television Network. Nelson Riddle one of the great and original composers of the 50's working with such legends as Frank Sinatra, Ella Fitzgerald, Nat King Cole.Limited first press of 500 copies.