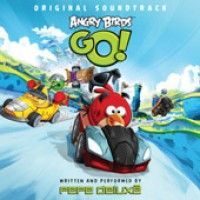 Mirumir Music Publishing proudly presents the world's first soundtrack to the mobile game, released on vinyl! The soundtrack for Rovio's «Angry Birds Go!» game is not quite the usual soundtrack. Recorded with dozens of live instruments, from the guitars and drums to theremin, saws and roasting pan with beef steak (full list of almost 100 instruments listed on the inner sleeve), this soundtrack contains more music than was used in the game, and even more than on the iTunes release. The incredible neo-psychedelic retro-funk groove from Pepe Deluxé, who started in the late 90s with trip-hop and downtempo, deserves to be listened on a high quality audio system, rather than built-in speaker phone. Guest list includes such eminent persons of the world music scene as a keyboardist of Yngwie Malmsteen's Rising Force and Stratovarius' Jens Johansson and most famous accordionist in the World, Kimmo Pohjonen.