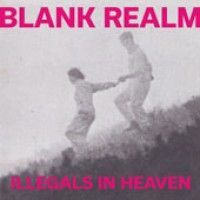 "Blank Realm are still bent on mixing the diamonds with the rough, and on Grassed Inn that particular swirl is at its most intoxicating." Pitchfork 8/10 // "Balancing the arty with the party to make for a set of danceable, hook-filled songs that bubble and bloom with an almost biological rampancy, shooting out tendrils of strange, snaking melody in every direction like vines enveloping a ruin" Guardian 4* // "A cracking selection of scuzzy, fuzzy psych-rock songs that recall Royal Truax and Sonic Youth" Uncut 8/10 // "Blank Realm generate scruffy, VUs-Sister-Ray-loving grooves, coloured up with blooping synths, and yowling, way-off vocals" Mojo 4* // Blank Realm's transformation across the Australian mystic from sprawling spaced out psychotic punk blues, through the startling maverick pop psychedelia of Go Easy to the widely acclaimed Grassed Inn, continues in its unrelenting quest for that quintessential synergy of chiming pop anthems. Hook-laden throughout they unleash their wild yet tender new album Illegals In Heaven which offers up freaked out reflections on life, love and circumstance. As knowing as the Chills or the Pretenders, loner ballads are as gnarled and world weary as Dylan in a cacophony as bruised as Royal Trux yet with the playfulness of Half Japanese. Recorded and produced with Lawrence English (head of the Room40 label) on a late night at The Plutonium studio in Brisbane, the album sees them on their first foray into a recording studio. While it wasnt exactly Abbey Road, it truly captures the chaos and majesty of the bands formidable live shows. It would be all too easy to say that Illegals In Heaven is their finest work to date, but the simple truth is that Blank Realm have been without peers for a trilogy of albums, so it just might be as Sarah huskily intones, "Gold" too.

Vanishing Twin
The Age Of Immunology