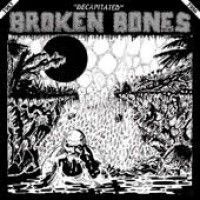 Formed in 1983, when punk may not have been dead, but it was definitely very close, by two DISCHARGE members, brothers Tony "Bones" Roberts and Terry "Tezz" Roberts, BROKEN BONES rescued UK punk from oblivion. Their first single, "Decapitated", was released in January 1984 and reached number 10 on the British independent charts, and the follow up single "Crucifix" was released in May of the same year, inevitably it scored just as highly as the predecessor, and proved that Broken Bones meant serious business. Originally released on the FALL OUT label in 1987, "Decapitated" collects their 1984-1986 production of singles, including the aforementioned debut 7" and rucifix' 7", along with the "Seeing Through My Eyes!" 10" and the "Never Say Die" 12".