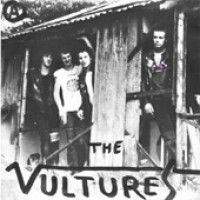 Official reissue of another of the scarcest Dutch punk records that was listed in the top 25 European punk rarities in Record Collector. THE VULTURES hailed from Epe, in the middle of the Dutch Bible-Belt. They recorded this 4 Track EP in 1981 that overtime has became impossible to find. Which is a shame as it is simply a masterpiece of Dutch Punk. Loud, proud and snotty, the sound is based around a trademark chainsaw guitar tone, plodding bass, passionate vocals and overall a clear UK influence. Without doubt if this band was english they would have been on Riot City, Rot or Secret Records or seen supporting the MAU MAUS, THE EXPLOITED or both DISORDER's (Bristol and North East). Reissued replicating the artwork as originally printed but adding a few unseen full colour pictures on the reverse sleeve.