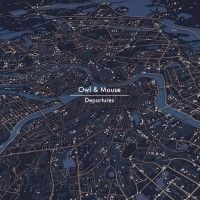 Debut album from London based 5 piece Owl & Mouse, fronted by Australian songwriter Hannah Botting, which began as a twosome with sister Jen.The addition of Tom Wade (We Aeronauts) and the prolific pairing of Emma Winston and Dan Mayfield (Enderby's Room, Darren Hayman's Long Parliament) has given Hannah's songwriting an added musical depth. Straight out of the same school of Australian songwriting as The Go-Betweens, Triffids and Courtney Barnett, Hannah's words follow her compatriots' ability to be widescreen and personal at once, infused with an added degree of delicacy and poignancy. In their dbut album they've made music which both swells the heart and conjures quiet reflection. Most of all, Departures is, as its name suggests, music to escape into.