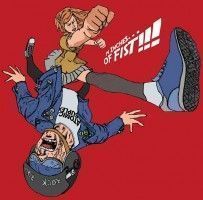 There is no way to accurately describe Atomic Suplex, though many have tried: rock and roll mayhem... loud, raucous, trashy, punky, rock and roll... like Guitar Wolf on mescaline... that might give you some idea. However, Atomic Suplex are one of the best live bands you could ever see, or even imagine. Screaming guitars, brutal, primal drumming and a twisted, wailing saxophone cutting through it all. Half of the band look like theyre being electrocuted on stage, and Atomic Suplex himself - resplendent in his fringed leather jacket, flying V guitar in hand and face covered by a miked-up motorcycle helmet through which he sings - is one of the most mesmerising characters on stage today. Atomic Suplex have toured Europe and Asia sharing the stage with such luminaries as The Hives, Guitar Wolf, The Gories, The Adolescents, Nobunny, The Kids, Jet Boys, Armitage Shanks, Richard Herring, The Spits, The Fat White Family, The Buzzcocks and many more. One review of their debut said, "This is not a band for the faint of heart. They play the sort of ultra-raw vicious garage rock that only exists in Jack Whites nightmares. If you want some raw, visceral rocknroll thrills this band comes highly recommended. Just prepare for the need to go and lie down in a darkened room after listening to them."