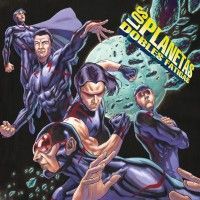 New EP by Granada band Los Planetas for El Segell del Primavera, 4 new songs with all Los Planetas' essence.Special limited edition.The first thing you ask yourself when you find out that Los Planetas have recorded two new tracks isn't whether they are going to be good or bad. What you ask yourself is who they'll be, the indie superheroes? -Check out the Marvel artwork by Al Barrionuevo -, the band that made hit after hit and captained a couple of generations? Or will it be more of the psychedelic onda', the legend and the opera, the band that embodies their sidereal sonic showpiece on the flamenco palimpsest of the 20 and the 30's? Will there be refreshing tunes, thriving ideas and planetary density? Do space rock, indie pop and the mastery of a free artist like Morente blend in well with the experience the musicians from Granada have gained this 2015, and if it does, how? Do J, Florent and the others have more songs and key tracks hidden away? What will the new album of Los Planetas be like? What will it be like? Psychedelic pop or flamenco? This is a trick question. Los Planetas, apart from forging a career album by album, are also creating a masterpiece that is a solid mass. It all adds up, forms, and commutes, coats. Each operation tries to find something new without losing everything they have already said. It was all for real. As a matter of fact, the short answer to whether pop (psychedelic), rock (radical here as you will see) or flamenco (according to Morente) is the three things. "Dobles Fatigas" is an EP, but it feeds you like an album. Four new songs, fewer than 20 minutes that, without doubt, orbit around Los Planetas. TRACKLISTING:1. El duendecillo verde2. Motores de combustión3. Estadística4. Heroína

Loud
Amy's Gonna Get You