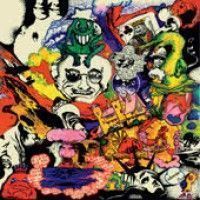 Repress!!The second album by Laghonia, one of the most important bands of Peruvian rock.Originally released in 1971, "Etcétera" will be cherished by lovers of Latin American rock, pop and psychedelia as practiced by other similar classic bands such as Traffic Sound, We All Together, Black Sugar and TelegraphAvenue.Presented in a replica of the original gatefold sleeve.In 1970, after four fantastic singles under the name New Juggler Sound, the Peruvian band formed by Saúl Cornejo (guitar), David Levene (lead guitar), Ernesto Samané (bass), Carlos Salom (organ) and Manuel Cornejo (drums) changed their name to Laghonia and recorded their debut LP "Glue" for the MAG label. It was an album influenced by the British rock of the era to which they added fiery guitars full of fuzz and wah-wah, the omnipresent and hypnotic Hammond organ sound and Latin American percussion and rhythms. A perfect mix of the British beat melodies of the mid-60s, Jimmy Hendrix's intense rock, Cream's heavy blues and Santana's Latin rock.Laghonia returned to the studio in 1971 to record a new LP for MAG. Packaged in a clearly psychedelic gatefold sleeve designed by the band's drummer, Manuel Cornejo, "Etcétera" shares all the elements of the first LP although on this occasion the compositions, while keeping their immediacy and featuring strong melodies and choruses, have a more complex structure, ranging from psychedelia to progressive rock through superb dark King Crimson-esque passages and shining moments of pastoral folk.TRACKLISTSide A1. SOMEDAY2. MARY ANN3. I'M A NIGGER4. EVERYBODY ON MONDAYSide B1. LONELY PEOPLE2. SPEED FEVER3. OH! TELL ME JULIE4. IT'S MARVELOUS