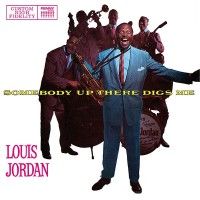 Jordan, Louis
Somebody Up There Digs Me (+cd)

By the time Louis Jordan's first LP was released in 1957 he already had 25 years as a professional musician under his belt. This is not to say that he was over the hill, on the contrary, he was well seasoned and in his prime. Somebody Up There Digs Me is filled with stellar reworkings of many of his jump blues classic from "Caledonia" to "Is You Is Or Is You Ain't Ma Baby", "Let The Good Times Roll" to "Ain't Nobody Her But Us Chickens". Recorded in NYC in 1956 with arrangements from a young Quincy Jones and guitar work from the legendary Mickey "Guitar" Baker, Somebody Up There Digs Me is a sophisticated and swinging set that's still sure to keep your feet moving. Reissued by Penny Records in a deluxe 140 gram LP version with a bonus CD of the album.