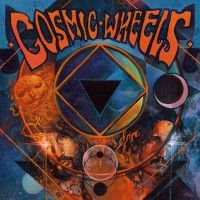 Cosmic Wheels is Paul and Vincent Marrone. From the ashes of their first band together-where they were known as The Moonshakers with the addition of their older brother Joe-came a new name and a new sound. Recorded in 2007, presented here, and available physically for the very first time, is a collection of rough and unfinished tracks from their Cosmic Wheels sessions. Late '60s to early '70s is the name of the game here-riffs aplenty with a copious dose of heavy psych. That's definitely not the whole story though, as the listener is treated to seasonings of jazzy goodness, as well as the odd helping of heavy blues-rock. There are clear nods to some of the brothers' most cherished influences in there too. If six words is all one had to describe this album, they would be 'Heavy Psych Rock Orgasmic Brain Burner', simple as that!

Midnight Messiah
The Root Of All Evil