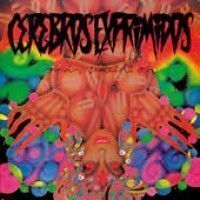 Originally released on Munster in 1990, "Más suicidios" was the first LP by this band from Majorca who in the late 80s revived the original punk rock genre in Spain.Featuring the band's own compositions, with echoes of Black Flag, Heartbreakers or Replacements, plus a Controllers cover ('Another Day').Especially remastered for this reissue.In 1990 Munster Records released "Más suicidios" by Cerebros Exprimidos, one of the label's first albums. The band from Majorca had reached beyond their island's borders with a mini-LP on Romilar-D and a cassette which compiled their early demos. They were making a name for themselves within the punk scene thanks to a personal style which blended proto-punk with a classic '77 sound and California punk. At the time there were no other bands in Spain paying tribute to Controllers. The album, despite a demo-like sound (it was recorded by Vicente Caldentell, an experienced musician who had been a member of Z-66), showed a band that walked confidently between punk and early hardcore. The recent addition of bass player Cañete, who came from bands with a faster sound, had provided an extra strength which allowed guitar player Juanmi to unleash his special style that drew equally from Black and The New York Dolls. Jaume's straightforward vocals told stories of maladjustment, rage and cocky attitude.Sleeved in a lysergic cover by Josetxo Ezponda (Los Bichos), the album was almost unanimously received by the press as a breath of fresh air. However, the reception within the most traditional sectors of their own scene was a little colder: too punk rock for hardcore fans, too hardcore for lovers of classic punk rock. Nevertheless, the LP planted a seed which would grow over their next two albums, "Bonzomania" and "Demencia", which along "Más suicidios" would form the holy trinity of the genre in Spain.25 years later, Munster reissues this piece of history where some guys from Palma managed to shake their island and be the centre of attention thanks to the everyday stories of their raw and direct songs.TRACKLISTSIDE A1. A PUNTA DE NAVAJA2. PERDI MI MENTE3. ENTERRADO VIVO4. MAS SUICIDIOS5. SURFIN' DEE DEE6. DENTRO DE MI7. ZAPATOS DE PIELSIDE B1. EL SUEÑO2. ESQUIZOFRENIA3. LA VISITA4. ARREPIÉNTETE5. TIENES RAZON6. VACACIONES EN SIBERIA7. ANOTHER DAY

Gino And The Goons
Shake It!