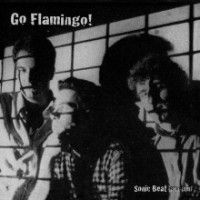 Despite what one might think - upon trusting some overly enthusiastic retrospective where reality is often mixed up with legend - in Italy in the 80's New Wave bands were not a particularly dominant phenomenon and it's not even true that every city produced a particular scene. Anyway, in Ferrara, things were going better than elsewhere, as is shown by a collective LP published between 1984 and 1985. The album, entitled A White Chance, was sponsored by the White Studio and consisted of nine tracks equally divided between three different bands: Plastic Trash, Intelligence Dept. and Go Flamingo! In fact, the tracks of this last band (recorded in 1984) were already known thanks to a demo already disseminated on tape the year before. The trio (born in the autumn of 1982) had a well-conceived and elaborate style, even though they were inspired by the melodic and crepuscular Post Punk of British bands such as Cure, Comsat Angels, Sound and Big Country. The essential formula of guitar, bass and drums, with no keyboards, unlike most of the bands of the period, gave strength and personality to their urgent and inspired sound. When the compilation began to have some success within our little underground circuit, the Go Flamingo! won Indipendenti 84, an important contest (more than 500 participants) organized by Fare Musica magazine. In addition to a Fostex four track recorder, and some good publicity, winning the contest meant the offer to release an LP for the newborn label connected to the magazine; so just after Christmas '85 the band locked themselves up for eight days in the Lark Recording Studio in Carimate and when they finally came out, the result was the six tracks that eventually made up their first self-titled Mini LP. This Sonic Beat offers in chronological order, this historical band's entire repertoire, in other words, the first demo's five episodes (1983) the three tracks from A White Chance and the six ones from the Mini-LP, plus an unreleased studio track dated 1988. All the material still sounds alive and fresh with its own mix of energy, hypnotic rhythms, fascinating melodies, dark but not oppressive atmospheres, and magnetic singing. Maybe this will not refund the band for such a long and undeserved oblivion but it's a start.