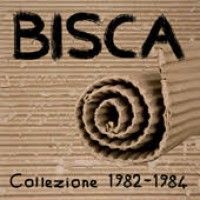 In that foreshortening of the early 0, the link between Naples and the U.S. megalopolis wasn't out of question at all; the cultural miscegenation, the discomfort and the liveliness of Naples were mostly akin to the ones of the Bronx and the Bowery at that time. Easily, therefore, at our latitude Bisca were seen as a sort of Italian answer to the (in)famous no wave scene, also showing links to English contemporaries as Pop Group/Mark Stewart. Magmatic and white-hot as the heart of the volcano Vesuvio, their music wrapped and burned, on record and (overall) on stage: an infernal sabbath based on relentless rhythms, lashes of guitars, vitriolic saxes and bullying singing, from which muddy and menacing atmospheres eventually emerged refinement and discipline. A Funk-punk-jazz urgency that is amazing at any level. Besides the roots of the group, who - in 1981 - were playing an updated version of ska, with the earlier moniker of Biska; whoever guessed that just a year after they would be able to elaborate such a devastating synthesis?Even preferring the bruised tones, from 1981 onwards Bisca have been through a lot of changes and their route is still exemplary at any level. So it is important to remember and celebrate for the first time on CD their excellent beginnings, collecting every release on vinyl published between 1982 and 1984 plus 2 unreleased tracks and a second live CD - unreleased as well - with the boys in top form at the Rôte Fabrik in Zurich in 1983. More than 2 and a half hours of blood and sweat, rage and amusement, intensity and catharsis, still ahead of their time; without any doubt, one of the artistic and expressive peaks of that polyhedric phenomena history would label as Italian new wave.

Pere Ubu
The Art Of Walking