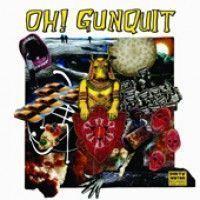 OH! GUNQUIT are a London-based rumble-bop trash freak-a-billy five-piece that formed in 2011 after neighbours Tina Swasey and Simon Wild met each other while frequenting a North London vinyl-only sweaty cellar club DJ night. After an energetic pogo competition they decided to create a group blending their love of wild garage punk, exotica, raw rhythmnblues and surf-trash. They have played shows, festivals and events in the UK and around Europe alongside acts such as Black Lips producer King Khan with his Shrines, Fat White Family, Public Service Broadcasting and Andrew Weatherall.. The group have also done two live sessions for Londons only independent art radio station, Resonance FM, and the singles have had frequent airings on BBC Radio 6 .They are a sight to behold with bags of personality and an endearing amount of humour. Their music and performances appear effortless, with lyrics that are macabre and kitsch and a live performance that is better than any art-punks out there at the moment. This is retro pop at its killer best. You know that this is a band that, in years to come, people will be arguing over which cramped Camden basement they saw them in first. Live on stage, the fiery, exotic sound on Eat Yuppies And Dance has been described as a cross between The Cramps and The B-52s, a unique blizzard of horns, spirited howls, buzzsaw guitars, hula hoops and fun, riotous rocknroll abandon.

Oh! Gunquit
Why Haven't You Watered The Plants?