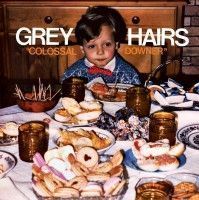 Release is on heavy vinyl only (495 copies, orange vinyl, with download code). Colossal Downer is the first long-player from Nottingham quartet/self-help group Grey Hairs. Split over 2 sides of orange vinyl, the album was originally conceived as 2 EPs: Side A: "Man Gulps" and Side B: "Little Fingers", in an attempt to provide some "listening convenience" - much like a serial - were all busy people these days after all. Together they are the Colossal Downer LP recalling nothing less than the pre-goldrush, anything-goes era of Nirvana before everyone got so hung up on genre definition. Rapid-fire punk rock blasters nestle up to a lumbering caveman grind. Echoey surf clang shares vinyl space with riff-heavy garage fuzz. Its how records are meant to be: idiosyncratic and representative of the people who made them. Featuring members of UK underground bands as diverse and respected as Lords, Fists, Cult Of Dom Keller, Fonda 500 and Kogumaza, Grey Hairs is a conscious attempt to return to the gut instinct impulses that got its 4 band members out of their bedrooms and onstage in the first place. With a reputation for carefree and chaotic live performances, the men and women of Grey Hairs have turned what started as an excuse to go to the pub on a weeknight into something truly special in a relatively short space of time.

Chrome Reverse
You Say You Love Me