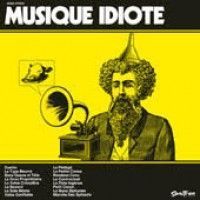 Roger Roger (5 August 1911 - 12 June 1995) was a French film composer and bandleader. His aliases included: Eric Swan, Cecil Leuter, the last being a pseudonym he used for his electronic productions. He was one of the first with Pierre Henry and Jean-Jacques Perrey to experiment with the Moog synth; his Pop Electronique album was released in 1969, five years after Bob Moog put his synth on the market."Musique Idiote" Super rare experimental moogy LP by master Roger Roger, with beautiful cover art and a definitive collector item for any Dada/absurd/Monthy Python fans!. Its full of short analog synth compositions on the theme of "extremely annoying and devolved." Kinda like how total madness-seeming an album of circus calliope would be, but more circuit-bent. This is music to bash your brains out with a hammer to!Roger Roger was one of the kings of library music, and this album is part of the Neuilly series out of France (easily one of the best and coolest libraries, one which also employed library composer giants Janko Nilovic, Cecil Leuter, Yan Tregger, Jean Bouchety and Nino Nardini!)